At the 23rd Annual Interfaith Breakfast held at Bryant University on Feb. 12, Fr. Bob spoke to people of all faiths gathered at an event designed to provide an inspirational hour of music, prayer, and a spiritual message.  This year’s theme was Honesty, Healing and Wholeness.   The Interfaith Prayer Breakfast is patterned after the National Prayer Breakfast held during the first week of February each year in Washington, D.C. as well as numerous locations across the country.

Allow me first to say a word of sincere gratitude to Mrs. Machtley and the Interfaith Breakfast committee for their kind invitation to be the keynote speaker at this year’s breakfast.  As you may know, each year we rotate a different faith group to be our speaker including our Jewish, Christian, Catholic and Muslim friends.  Since this year it fell to a Catholic speaker, and Pope Francis was not available, I was given the honor.  It is always a pleasure to be part of campus life here at Bryant and especially to be part of such a great event that gathers people of all faiths and in a spirit of cooperation and respect focus on the one task that we all share: to know, love and serve the One who made us and to do so together.  As you may know, our theme this year is Honesty, Healing and Wholeness, the pathway to true peace in this life and hopefully the tools we can use to get to the next. 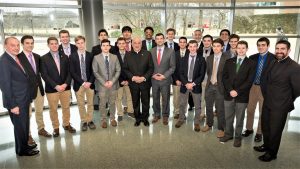 Dec. 25, 2018—It was a chance of a lifetime.  Natalie Gilbert, a 13-year-old eighth grader from Lake Oswego, Oregon had won the competition to sing the national anthem at the first playoff home game between the Portland Trail Blazers and the Dallas Mavericks.  It was a sellout crowd and a nationally televised audience of millions.  She had sung the song hundreds of times and even minutes before in the locker room for the home team and now her big moment was here.  As the nation’s giant flag was unfurled and she took to center court to sing a hush fell over the crowd. She began perfectly on key, and then, just a few lines into the song, she suddenly went blank and forgot the words, stumbling to regain her poise.  Helpless and with tears in her eyes, she glanced to the sidelines for help.  And that is when he appeared as Coach Maurice Cheeks of the Blazers walked to her and placed his arm around her and began to sing along.  As Natalie begins singing again, the Coach motions to the crowd to join in and suddenly the entire arena is singing too.  The struggling singer has been saved and a thunderous applause erupts when the song finishes as Coach Cheeks and Natalie walk off together.”  [Read more]

He has served in many previous parochial assignments within the Diocese of Providence.  In January, 2019 Fr. Marciano was named President of Bishop Hendricken High School by Diocese of Providence Bishop Thomas J. Tobin.   Fr. Marciano previously was a member of the Board of Directors for Bishop Hendricken High School and as President remains on the board ex-officio.  Fr. also serves on the Board of Directors for the House of Hope, and is an Ambassador for Ocean State Theatre. He was made a Knight of the Holy Sepulchre (KHS) by His Holiness Pope Benedict XVI and received those honors at an installation Mass celebrated by His Eminence, Sean Cardinal O’Malley, the Archbishop of Boston in 2003. Since 1992, Father has served as a Chaplain for the United States Air Force. From 2006 to 2010, he served at the National Guard Bureau at the Pentagon in Washington, D.C. and as Chief of Chaplains for the Air National Guard rising to the rank of Colonel.  On September 15, 2016, Fr. Bob retired as Chaplain for the Rhode Island National Guard.